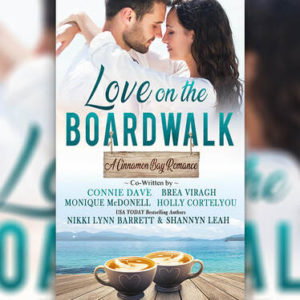 Love on the Boardwalk (A Cinnamon Bay Romance Book 1)

She’s hiding a broken engagement.
He’s concealing his true birth heritage.
They’ll have to trust their hearts even if they’re sure love is a lie.

Now that Eva Halloway is back in her hometown of Cinnamon Bay, she has one full plate with the grand re-opening of her newly inherited boardwalk cafe and a broken engagement to hide from the town gossip mill. First, Eva must bury her bruised heart, and second, she must ban the ridiculous Cafe Amour drink from the menu. But, sexy stranger, Mac Jenssen strolls into her cafe and before she knows it, they’ve both sipped on the legendary love concoction. By the end of the day, Eva is up to her neck in a feud with a trio of matchmaking little old ladies and wondering if she can trust herself to help Mac uncover his past.

Macklin Jenssen arrives in Cinnamon Bay to search for the family who gave him up for adoption. Instead, he finds Eva, a legend about love, and a lighthouse with ties to his past. Plus, a spiced drink that is out of this world delicious. He hasn’t bargained for any of it, but he isn’t saying no to love either. In fact, the more he comes to know Eva, the more he’s considering a permanent move. Too bad she’s made up her mind about him, and the odds aren’t in his favor.

With town gossip and crazy bat-wielding locals, Eva and Mac face an uphill battle. It might be opposites attract or even fate, but they will have to learn to trust in each other and the power of love if they ever want to find their happily ever after.

Get Love on the Boardwalk here.

Other books in this series:

Haunting on Seafoam Street: A Steamy Meant to Be Romance with Paranormal Elements (A Cinnamon Bay Romance, Holiday Collection) – Book 8

A Christmas Arrangement by Monique McDonell

Celebration on Seafoam Street: A Steamy Happily Ever After Romance (A Cinnamon Bay Romance, Holiday Collection) 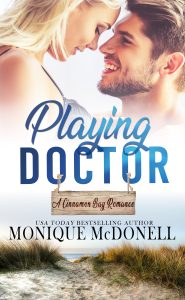 Allie Stapleton left Cinnamon Bay for college, swearing to never return to the small town where she grew up.  Now however she’s and her MBA are heading home from New York – she’s tired and she wants more in life than just a job. The local hospital is hiring a new director and she has the education and enough experience to be a contender. The only problem is her competition is the resident doctor at the hospital, the boy next door and her old high school crush Trace.

Single father, Trace Collins loves being a surgeon and raising his daughter in his home town, but the hours are impacting his daughter in the worst way. His coveted position at the hospital doesn’t matter– he needs to make a change to be home more. A position opens up that might just challenge him: hospital director. He applies immediately, expecting to be a shoo-in until he hears Allie is in town.

They’d played doctor growing up, and while competing for the same position should put them at odds, it only seems to put them in the mood to take this rivalry to the bedroom instead of the boardroom.

Get Your Copy here. 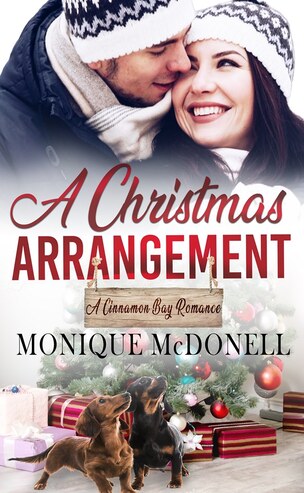 ☆ Tori ☆
Most people would move to a big city to get lost. I decided to move to a small town, Cinnamon Bay, to get lost…in the magic of Christmas.

Somehow, I’d timed it perfectly. Trust me, this was a first. My new boss at the hairdressing salon was ready to pop out a kid, and the festivities meant that the place was positively bursting with business. I moved right in. Literally. Until the owner’s nosy, hot brother found me sleeping in the stock room. We compromised and he invited me to stay at her place with him.

Just because I’d never trust another man again, didn’t mean I was completely against having one to share the holidays with. In fact, I might be just what Mr Grinch needed…for the holidays, since that’s about as long I could safely stay.

Don’t get me wrong. I’d love to stay longer. I’d love a home, but I’d grown accustomed to disappointment. I was afraid of lingering anywhere too long since Joel had vowed to always find me. Still, I was long overdue for a Christmas miracle. And this town seemed like just the place to get one.

My word was my bond.

I promised my sister I’d stay here and help out since she had three kids, a baby on the way, and a husband deployed overseas. I promised I’d help run the salon, keep the place afloat in her absence.

Inviting Tori to stay at the house seemed like a fair trade. I needed the help. She needed a home. Only life wasn’t fair.

Tori, if that was even her real name, was secretive, shy, and easily impressed by a small-town Christmas. Soon, she had me taking part in the festivities. When things threatened to get ugly in the form of her ex, I pretended I planned to take her hand in marriage. I was a basketball player, not an actor. Soon the lines were blurred. Everyone in town was convinced we were really and truly engaged and in love. Maybe including us.

I kept reminding myself that we were too different. It wasn’t working. All I could see was how we were the same. All I felt was how much I wanted to be with her, if I could only convince her to stop pretending and really be with me.
​
Take a trip to Cinnamon Bay in this Christmas for a fun and flirty magical romance. 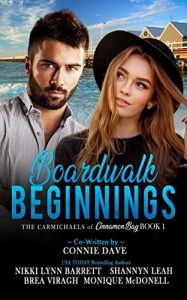 Cinnamon Bay’s spoiled diva is about to have her tiara toppled only to have it witnessed by her sworn enemy… her brother’s best friend.

London Carmichael, the middle daughter of Cinnamon Bay’s wealthiest family, lives off her father’s money while jet-setting around the world. Until one bad investment has the family losing everything. Now homeless and not a penny to her name, she is stranded at the airport. Who is sent to pick her up? Jacob Westley, the one man who can’t stand her.

Jacob would do anything for his best friend, even if it means helping out his buddy’s snooty sister. Years of fighting with London has him primed for the rounds of rapid-fire barbs he knew she’d throw. What he isn’t prepared for is their mutual attraction and off-the-charts chemistry. It’s in his best interest to stay away from her.

Only now London has come up with a plan and needs his help in saving her family. Jacob doesn’t have the willpower to say no. Will these two enemies call a truce long enough to accomplish their mission and find true love?

Meet the Carmichael siblings, each with their own unique personality like the different spices that helped build the family fortune. Some are hot and fiery, others mild and sweet. Some blend well together. Some don’t. Now that their wealth is gone, they must put aside their differences and come together for the first time. Follow each sibling on their path to survival and their journey into everlasting love.  One-click to start reading BOARDWALK BEGINNINGS today! Get it here. 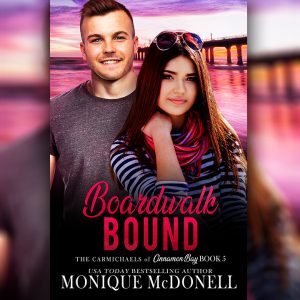