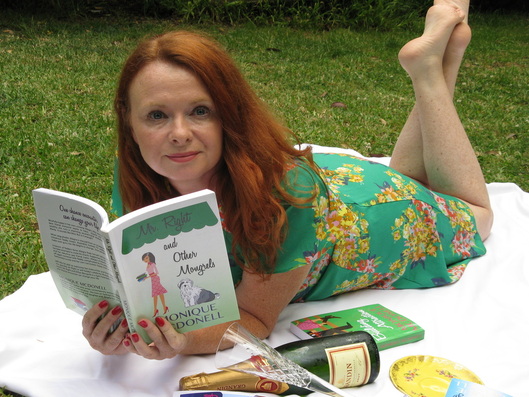 A Little About Monique…

I have written all my life. I was first published when a poem I wrote about a kookaburra in Year 6 (6th grade) was printed in the children’s pages of the Sun-Herald newspaper. A big moment for me because I got validation and ten dollars.

Working in public relations after I graduated from university where I did a minor in creative writing, I didn’t write for pleasure for quite a few years. However, I wrote many media releases, brochures and newsletters (and I still do in my day-job!) I put my creative writing on hold.

When I began to write creatively again, I noticed something. Writing dark unhappy stories made me so unhappy that I never finished them. So I decided to write a novel with a happy ending, and the words flowed so much that I have been writing happy stories ever since.

After I began a year-long writing course at the NSW Writers’ Centre its members (thank goodness) morphed into a writing group known as The Writer’s Dozen. In 2008 we published a highly successful anthology, Better Than Chocolate.

In 2008 I was selected for the QWC/Hachette Livre Manuscript Development Course for my novel Mr Right and Other Mongrels. In 2009 I received a Highly Commended in the Romance Writers of Australia’s Valerie Parv Awards for my novel Hearts Afire. These are the first two books I published in 2012, along with a third novel Alphabet Dating.

Since my first three books were released, I have written and published two more stand-alone novels, titled Building Attraction and A Fair Exchange and several novellas. My series include The Upper Crust Series, The Jewel Sisters, about four sisters from coastal Australia and the Courtside Romance series.

The final book in the Upper Crust Series, Any Way You Wish It was released in July 2021.

The new Marlin Shores romance series launched in September 2020 with Saltwater Song, followed by Saltwater Tears in December and Saltwater Wishes in June 2021

I’m also one of six authors who run the Coffee Talk on the Boardwalk Facebook group. Together we write the Cinnamon Bay romance series and my first stand-alone in the series Playing Doctor released in 2019 followed by A Christmas Arrangement, A Cinnamon Bay Christmas Novella which won 2nd place in the novella category of the 2020 RWA Ruby Awards.

The Carmichaels of Cinnamon Bay series launched in 2020 with Boardwalk Beginnings and my contribution Boardwalk Bound.

I have had non-fiction pieces included in Copyfight (New South Press) in 2015 and in How to Be an Author: 36 Real Authors Talk Writing and Publishing in 2016.

You might be surprised to find out that I’m not really like the characters in my books. However, I do share something in common with some of them. Allegra (Mr Right and Other Mongrels) has a dog phobia like me, Cassie (Hearts Afire) falls in love on a tropical island which is how I met my husband, and Amelia (A Fair Exchange) was an exchange student who is now all grown up.

I currently live on the beautiful East Coast of NSW in Australia with my husband as my gorgeous daughter has flown the nest and headed to university.

Check out the full list of my BOOKS which includes sneak peeks into some new and upcoming titles.
Or you can purchase them on Amazon.

If you are a writer looking for help with your author life you can visit me at GetSocialWriteNow for help and advice.